The Oregon Water Resources Congress (OWRC) is a nonprofit trade association that represents irrigation districts, water control districts, drainage districts, water improvement districts and other agricultural water providers across the state of Oregon. Our district members deliver water to more than 560,728 acres of farm land state-wide, roughly 1/3 of all irrigated land in Oregon. 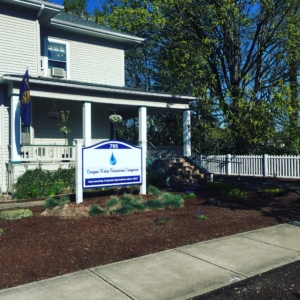 The mission of the Oregon Water Resources Congress is to promote the protection and use of water rights and the wise stewardship of water resources.

How we take action to meet our mission.

Fight for protection of water rights

Be a technical resource to its members

Advocate on behalf of its members

Disseminate information to its members

The Oregon Water Resources Congress (OWRC), incorporated in 1912, represents local governments throughout Oregon that provide irrigation water. These entities and the thousands of water users they supply embody the association’s founding principles to promote the development, control, conservation, preservation and utilization of land and water resources of the State of Oregon.

OWRC identifies issues of concern to the membership on an immediate basis through the association’s web site and email listserve. The association represents its members’ interests in Oregon before the legislature, promoting legislative changes to meet the members’ needs; supporting positions at natural resource agency hearings and rulemakings; and participating in other forums where water issues are the agenda.

For over 100 years OWRC has represented its members’ interests before the Oregon Legislature and nationally before Congress promoting legislation to meet members’ needs.

Promoting the protection and use of water rights and the wise stewardship of water resources
795 Winter St. NE
Salem, OR 97301
(503) 363-0121
Sign up for Event Updates.
© 2022 Oregon Water Resources Congress - All Rights Reserved.
Site Created by Abide Web Design.